Christmas Oratorio and other festive songs

Last night hubby and I went to a concert performed by Exultate, a group that our former choir director sings with.  It was performed at the St. Thomas Aquinas Chapel at the University of St. Thomas in St. Paul, MN.  What a lovely church.  And a great venue for a concert such as this.  The acoustics were amazing!

This Jesus suspended from the ceiling is breathtaking: 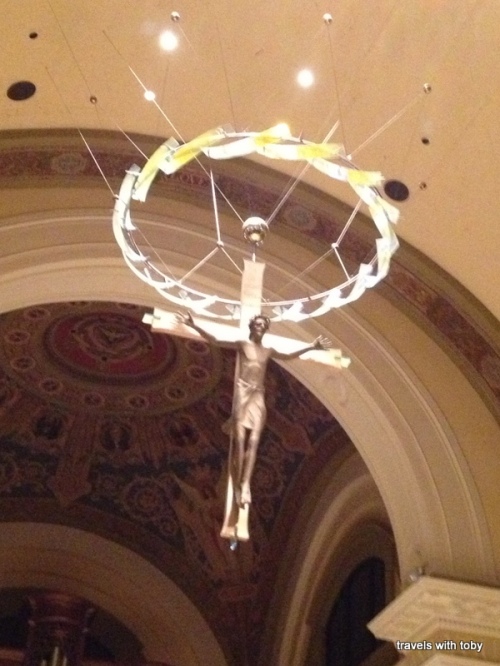 The first half consisted of 14 of the 64 movements of Johann Sebastian Bach’s Christmas Oratorio.  The concert started with the director explaining things about some of the movements we were about to hear.  One was the fact that Bach borrowed music from his previous compositions and simply changed the texts so that they would fit with the Christmas story.  I definitely recognized a couple of those.  The program describes how Bach uses music to give a picture of the texts being sung.  Since the program describes it so well, here’s part of that section word for word: “this is nowhere more evident than in movement 10 where the violins are racing off to Bethlehem at a furious pace and at the same time the voice parts, with texts being sung independently of one another, tell us ‘Let us even now go to Bethlehem.'”  I could definitely feel them racing off to Bethlehem.

The second half began with the choir surrounding the audience and although our friend was on the other side of the church, I could hear his voice.  What a treat that was to hear voices singing all around us.  And what a rich sound it made too. This is a shot of some of the choir near us:

I think that was my favorite part. They sang more Christmas songs, some familiar and some unfamiliar and then we all got to join in at the end for Joy to the World.  A great evening of Christmas music!!

Afterwards we drove down Summit Avenue because I had seen some marvelous Christmas lights recently and wanted to show them to hubby.  This tree stands in the front yard of the governor’s mansion: 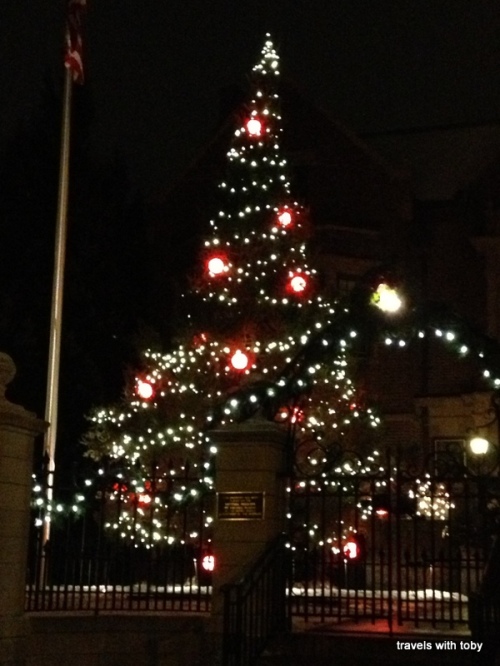 And across the street were more but I wasn’t able to get any good shots of them.  On our way home we stopped at White Castle since hubby had a hankering for their “sliders” and I got a chocolate milk shake.  Not the best thing to have on a cold night but it sure tasted good!