Madrid then and now

At the end of August 1980 I embarked on a new journey.  I went to Madrid to spend my junior year in college as part of a group of about 30 students from Cal State colleges.  It was a momentous year, full of fun and new experiences.  That doesn’t mean I wasn’t homesick, I certainly was.  But I did manage to have a good time and I did a bit of traveling while in Europe.  And Spain left an indelible impression on me that’s stayed with me all these years.

After one month of our curso intensivo (intensive course) and living in a dorm, we all moved to various places across the city and went to classes at the University of Madrid (Facultad de Filosofía y Letras).  I lived with 8 other people, 7 of them were students.  One was a young Japanese woman named Mitsuko who knew no English so we communicated with her in Spanish.  We occupied two apartments with 5 of us living on the 6th floor, the other 3 lived with our two señoras, who were sisters, and their mother on the 4th floor.  Our señoras fed us and washed our clothes and it was a pretty good deal, especially for the 5 of us that lived on the 6th floor. We had more independence than our roomies on the 4th floor and we really liked that.

I decided to visit the building I lived in all those years ago when my husband and I were in Madrid last March.  I had not kept in touch with my señoras so I had no idea what to expect. I bumped into a nice, older lady who was entering the building and she let me in.  I asked her if she knew Teresa y Aurora, if they still lived here.  She thought a moment and then said “Hermanas?” (sisters?) Yes!!  She knew them and yes, they still lived there!! My heart began to race I was so excited to learn this.  And then, will they remember me? It was, after all, nearly 30 years since we had seen each other.  The nice lady and I had a lovely chat and she complemented me on my Spanish and how important it is to keep it up. She told me that my señoras no longer have students living in their apartment and that they rent out 6C, the apartment that I lived in. Really, really nice lady. It was so nice chatting with her. And then we parted ways, she offered to hold the elevator for us but I preferred to take the stairs, for old time’s sake. I went up and down those stairs countless times when I lived there.

We climbed the stairs up to the 4th floor, I held my breath and knocked on 4A’s door. No answer. I knocked again.  I knocked one last time but there was nobody there.  I came so far and I didn’t get to see them.  It was so disappointing. Next, we went up to the 6th floor and knocked on 6C’s door.  A young gal answered and I began in Spanish and then realizing that she was probably American asked if she spoke English. Sure enough, she was from California so I took the easy way and spoke English with her.  I told her I had lived in the apartment 30 years ago and “would you mind if I took a look around?” She tried to explain that the place was a bit of a mess but I didn’t care, and she let me in.  How weird it was to be there after all these years.  I swear all the pictures on the walls were the same as when I lived there. And the furniture looked the same too.  I was struck with how small it was.  How did it shrink all these years later? Well, I got a little thrill seeing my old place and the gal offered to give a message to my señoras so I told her my name and I’m sure they got my message.  I also followed up with a letter a couple of months after we returned and sent a pic from 1981 and a pic of me standing in front of the stairs(above) from 2011.  I haven’t heard from them but I hope to see them the next time I’m in Madrid.

Most of the group that I lived with. Aurora is standing at left, Teresa at right. I'm the first one seated at left. 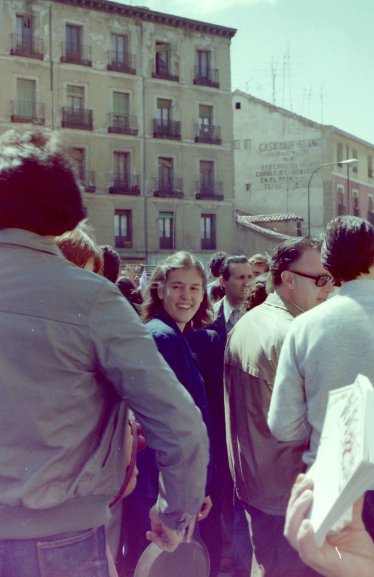 9 responses to “Madrid then and now”