“There was, there wasn’t . . . In a land far away – a great and mighty Kurdish tribe called the Babanis. The Babani men were known throughout the land for their patriotic sentiments, their fierce fighting habits and their sexual prowess.  In contrast, the women were said to be kind, forgiving, hardworking and excellent cooks. In this respect the men and women were well suited for one another. And so as one may imagine the tribe flourished spreading children throughtout Kurdistan. In more recent years, the great leaders of this mighty empire could not contain the curiosity of young men whose desires to explore the treasures of exotic lands were insatiable. In keeping with their Babani male tradition, this especially applied to the wonders of women. So many as we say here in Minnesota, “took to the trials”. One exceptionally brave and handsome young man;

Jamal, son of Abdul Karim, Mohammed, Qadir, Gafur Fuad, was the first to leave his tribe. He made his way to the Americas where one day he heard some interesting news on the radio. The reporter was saying, “In Minnesota the women are strong, blond and beautiful . . . their children are far above average.” He needed no more cajoling (for he felt the news was directed at him) before he found himself among this mysteriously mild yet unsparing culture. And as he had hoped he soon met Gail, a most beautiful young blond maiden. Much to his delight he realized that she had many of the qualities of the women of his great Babani tribe. Still, he was unsuccessful in convincing his parents of this face. And Gail’s parents, Barb and Ed, were unimpressed by Jamal’s tribal ancestry. In spite of the many protests Gail and Jamal were soon to marry . . . And this is how the first Kurdish restaurant came to be in Minnesota . . . The End” 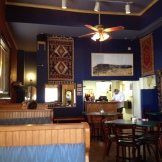 The story above is what you find on the front of Babani’s menu as well as their About page on their website.  I thought it was such a nice story that I had to share it with my review of this outstanding restaurant in St. Paul.  My friend at work (now my former job) asked me if I’d be interested in eating there and I’m always up for new food adventures so I said “Sure!” And we headed out into the cold with our boots and parkas on and made our way north and west to this small, charming place that is not attached to a skyway. A pleasant young man waits on the tables and he too is very charming.  That time we both had Chicken Tawa: Chicken sauteed in lemon and other spices then baked in layers of potato, green pepper, onion, and dried limes.  Served with basmati rice.  The chicken was so moist and tender, it melted in your mouth and was heavenly.  We also split an order of baklava.  Oh my, yum!!

We went back to celebrate my new job. We chose other items from the menu and this time I took pictures.  We started with an appetizer called Bajan Reshk: Deep fried eggplant covered with Jajic, cucumber, olives, tomatoes, lemon.  Served with bread.  Again, very delicious. 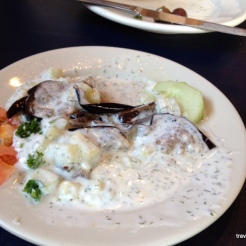 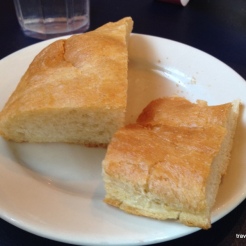 For lunch, my friend chose Kubay Brinj: this rice “dumpling” is filled with lean ground beef, special spices, olive oil and parsley, then quick fried to a crisp brown shell.  She enjoyed it immensely. I’m getting the impression that anything you choose on the menu is very good as she’s had 4 or 5 of the dishes from the lunch menu so far and sne’s enjoyed them all.  I had Bakla: Kurdish saute of mushrooms, broccoli, zucchini and onion in olive oil with pepper and other seasoning. Served with basmati rice.  It was really good albeit a little spicy, but not enough to make me stop eating it :) You have a choice of side dish and we both had the tabouli.  I used my friend’s photos, I liked them better:

I thought I could not eat another bite…..until my friend suggested the baklava again.  Such a sweet and nutty treat and something one should really have here.  It’s served warm and I had never eaten it this way.  But I gotta tell you: it’s the bomb!!   We were so anxious to eat it that I forgot to take a photo!  Until the last bite:

the last of the baklava

beautiful peacock in the entryway of Babani’s Kurdish Restaurant in St. Paul

more beauty at the front door

I highly recommend this charming downtown restaurant.  It’s cozy with friendly and quick service.  Do make a point of eating here, I’m pretty sure you’ll go away happy.