Back to more posts about Spain!!  This one is about our day trip to Córdoba from Málaga, one of only a few nice weather days that we had on our trip.  It started out chilly but warmed nicely by midday.  We had tickets for a table for this train ride which was something new. When searching for these tickets, it was cheaper to buy four seats at a table than three regular seats.

It’s only about an hour train ride but it travels through very scenic countryside and pretty soon you’re in Córdoba.  Such a cute and very walkable little town with ancient buildings including the big draw, La Mezquita (the mosque).  We opted to take a taxi instead of walking to the Mezquita and the driver dropped us at the front door.  The moment you walk into the mosque you can smell how old it is.  What lies in front of you are row upon row of white and red arches, 856 of them! This humongous building has been through many transformations, starting out as a church, then it became a mosque and in the 16th century King Carlos V had a cathedral built in the middle of the mosque!  It is the strangest building I’ve even seen. The king himself did not like the way the cathedral turned out and famously said “they have taken something unique in all the world and destroyed it to build something you can find in any city”.  I hope you will enjoy this gallery of the inside of the mezquita/catedral: 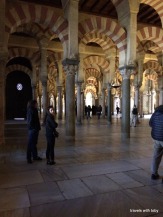 example of one of the many crypts in the floor

man cleaning brass in the cathedral 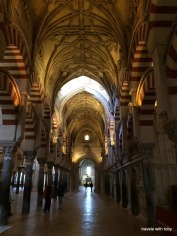 we dubbed this the gold room

Afterwards we strolled along the streets near the Mezquita to view one of three remaining Jewish synagogues in Spain, the other two are in Toledo.  It is so tiny that it’s hard to imagine people worshipped in there.  We made our way to Plaza de las Tendillas where we had lunch and visited some shops.  We wandered around some more and soon it was time to catch our train back to Málaga.

minaret in the Patio de los Naranjos of La Mezquita

I will leave you with one of my favorite photos from the trip, taken from the train on our way back to Málaga: 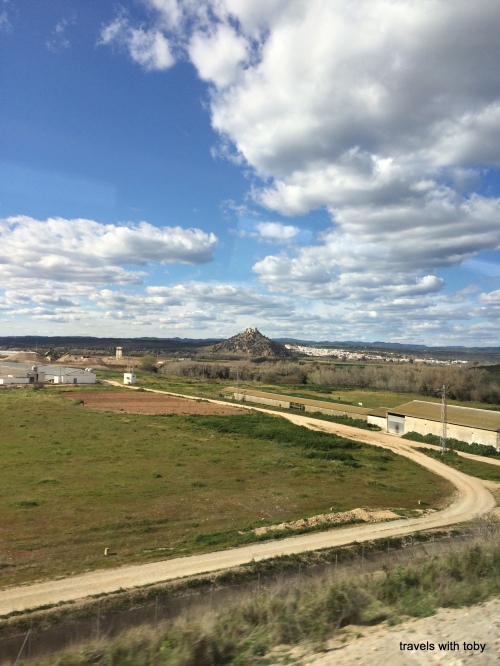