Eddie started life as we knew it in 2004 as M&M. The humane society gives names to all the cats and dogs available for adoption and so M&M was on the label of Eddie’s cage. I thought this was a strange name for a cat so he became Eddie to us after we brought him home. He was about 6-7 months old towards the end of 2004 and he was Miss M’s birthday present that year.

Eddie was such a docile and friendly sort. So much so, several neighbors really took a liking to him. He’d go to several houses in the neighborhood to visit all of his friends. One very amusing story happened just this past Christmas. It was another one of those bitter cold days that we get here in the frozen tundra of Minnesota but if the sun was shining, Eddie had to go outside. We thought that since it was so cold he’d be back soon. Hours went by and about 3:00 the doorbell rang. It was one of Eddie’s many friends in the neighborhood coming to deliver him back to us. She told us that he has a favorite spot in their house when the sun is shining. He had done this before where he’d disappear for hours and hours so now we felt better that he wasn’t stuck outside in the cold somewhere. He was being well taken care of down the street so we found out on Christmas day!

Eddie started losing weight just over two years ago. We had bloodwork done and our vet at the time suggested an ultrasound. The ultrasound was inconclusive but the bloodwork showed that his liver numbers were way out of whack. A biopsy of the liver was suggested but since Ed was already 12 at the time, I did not want to put him through any invasive tests. We gave him several different medications over the last two plus years but he continued to lose weight. We aren’t sure exactly what happened at the end. Either the liver issues finally got him or his heart gave out.

Throughout the last two plus years of tests and drugs Eddie kept his pleasant demeanor intact. He didn’t argue about the pills I carefully placed at the back of his throat so that he wouldn’t spit them out. He did argue about being brought to the vet but what cat doesn’t do that? He never acted sickly, he was just the same old Eddie he’d always been. He was just very thin.

We’ve always had two cats. When one would die, we’d go get another so there would always be two. But we are hoping to retire to southern Spain in several years. The original plan was to take Fritz with us. We got Fritz as a kitten in 2010 shortly after our cat Clyde passed away. But poor little 6 year old Fritz met a horrible end to his life in 2016. We figured that Eddie probably wouldn’t be around in several years but we didn’t figure on Fritz dying so young :(

So, here we are catless for the first time since 1989 and it’s very odd. Miss M thinks we should get another cat, that the house needs a cat. She thinks that since we were planning on taking Fritz on our journey to Spain that we could take another cat. But honestly, the trip is going to be hard enough. I’m not sure I want to make it harder by taking a cat along. Someone in a diary of another blog that I follow suggested fostering. That does seem like a good option and I’m going to look into that, just not right now. Perhaps this summer or in the fall after Miss M starts college. I might need to nurse my empty nest syndrome by then. And a new cat, or cats, in the house might be just the thing.

Eddie made history by becoming our first pet to make it past 12 years of age. We didn’t know the exact date of his birth so we had picked March 1 to celebrate his birthday. And since he was just two weeks shy of being 14 on March 1 I decided that he was in fact 14 when he died last month.

Rest in peace old boy. You were the best cat ever. Thank you for nearly 14 years of fun.

Eddie boy, Fred Fred, Edward Bear, Edward, Ed E. Boy — some of the nicknames we gave him over the years.

I hope you will enjoy this gallery of my handsome cat Eddie.

Eddie’s about one, Miss M is 5

Thanksgiving 2013: please can I have some turkey? 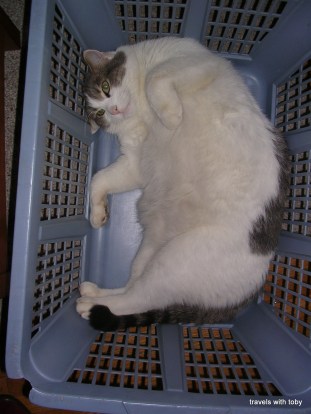 Eddie in a basket 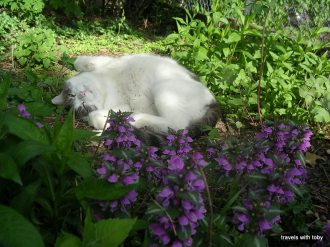 he knew where the catnip was

he loved hangin’ out in the open windows

he loved hangin’ out on the steps too 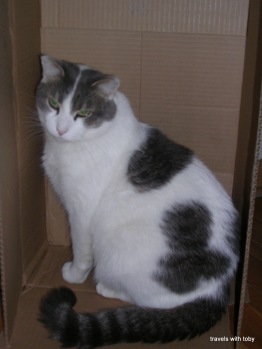 Eddie in a box