I have been to Washington, D.C. many times. So many that I have lost count.  My first time was in 1973 and the last time was just a few weeks ago.  This trip was unusual for a couple of reasons. One, it was the first vacation that I have taken with just my husband since 2011 when we went to Spain for our 20th anniversary.

While our daughter was in New York learning more about making music with her viola, we took a trip to D.C.  just the two of us.  We succeeded with our intention to not rush anything on this trip.  We had a rough plan of what we wanted to do and naturally that plan changed a little bit.  But that’s okay since nothing ever goes according to plan completely. We adjusted as needed and it worked fine.  The other reason this trip was unusual is that we stayed right in D.C. I have never done that before and it was just great!  We were close to a metro station and used that and walked and even took a couple of cab rides to get around.  And oh, did we walk!!

I’m writing this post in response to my friend Cathy’s Prose invitation so it’s going to be just a rough synopsis of what we did, a few photos of what we saw and the main focus of our plan to not be rushed.  I also plan to create more detailed posts on everything we did.  I hope you’ll come back to check those out!

Our first day started out as planned, however, it was so oppressively hot that day that we changed it up quite a lot. Our first stop was Arlington Cemetery.  Hubby did not want to do a tour so we wandered around on foot and found the things we wanted to see: all the Kennedy family graves and the tomb of the unknown soldiers from the Civil War. We actually had trouble finding this tomb so we asked a park ranger who was stationed outside of what used to be Robert E. Lee’s house, Arlington House. He pointed out that the graves along the perimeter of the house were there specifically to anger General Lee and to make his once grand mansion uninhabitable.

Our intention to walk across the Memorial Bridge to see the Lincoln Memorial and Vietnam Veterans Memorial was interrupted by the aforementioned oppressive heat. Instead we got back on the metro for a different plan. We got off at George Washington University and there waiting for us as we exited was a restaurant with a bar for us to take refreshment and gather our strength for the 15 or so minute walk to the Vietnam Veterans Memorial.

Our original plan was to take our time strolling the mall, eat lunch then end at the National Gallery of Art East Building. Instead we got a cab to take us the nearly two miles to our lunch destination.  And our timing was perfect as we got there before the lunch crowd, had a nice table in the cool Pavilion Cafe next to the window so that we could see some of the National Sculpture Garden.  We viewed some sculptures on our way to the National Gallery of Art’s West Building but our destination was the East Building. I knew there was a pathway underneath between the two buildings but I had no idea that pathway would feel like a ride at Disneyland.

I had never been to the East Building of the National Gallery of Art and we both absolutely loved it. From the bright and airy atrium containing a famous mobile to the rooms emanating from that central atrium, it made for a pleasant visit to see wonderful pieces of art.  We saw Picasso, Braque, Stieglitz, O’Keeffe and Matisse, to name a handful.

Following is a small gallery of some photos from our first day in D.C. that I hope you will enjoy. 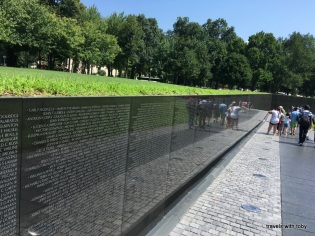 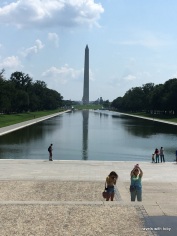 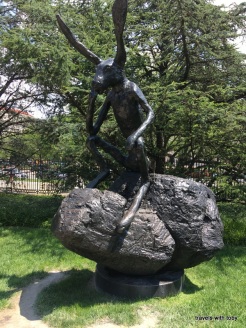 Thinker on a Rock-National Sculpture Garden 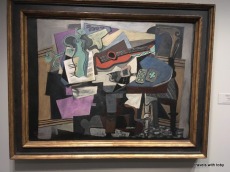 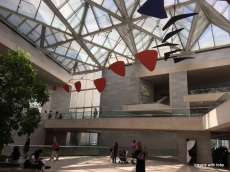 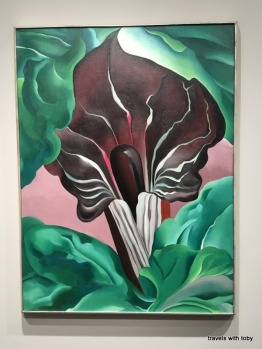 Our second day we spent apart as part of the reason for the trip was for my sister and I to go through our mother’s photos and somehow divvy them up between us.  We had taken the metro to Virginia after our first day of touring D.C. to my sister’s 60th birthday party. I spent the night at my sister’s while hubby went back to the hotel and spent the next day touring the Holocaust and Air and Space museums.  I met him back at the hotel that evening and we had a fine meal at P.J. Clarke’s near our hotel.

Moving on to our third day.  I met my sister and nephew at the Metro Center metro stop and the three of us had a grand time shopping the Nordstrom Rack, Zara and H&M.  We stopped at Peet’s coffee shop for refreshment before heading back out into the heat to meet hubby at the National Portrait Gallery. On our way was Ford’s Theatre where Lincoln was shot so we stopped briefly in there to see what we could see.  We discovered that the museum is free but that you need a timed entry ticket to view the theatre.  We didn’t have time for that but my sister took a brochure because she wanted to come back another time.

I had never been to the National Portrait Gallery and since reading about and viewing the portraits of Barack and Michelle Obama online, I made it a point to get there this trip to see them in person.  I had no idea the treasures within the walls of this museum!  Wow, wow and more wow! And we just barely scratched the surface so I would like to go back again.

All of the presidential portraits are worth the time, but two portraits moved me to tears which was very unexpected. I had seen photos online of Barack Obama’s portrait but seeing it in person overwhelmed me.  His portrait is cordoned off as it is very popular and people wait in line to have time to view and take photos.  It is enormous and Obama is a bit bigger than lifelike with a serious look on his face. It felt like he was staring right at me.  I felt a wave of emotions as I stared back at him, from gratefulness for his presidency to sadness that he is no longer leading our nation. He is truly one of our greatest presidents and I’m happy his portrait has great prominence in our National Portrait Gallery.

The other portrait that moved me to tears was of Thurgood Marshall.  He played a major role in the 1940s and 1950s as a leader in the struggle to end racial discrimination in the United States(these words copied from the information next to his portrait).  I have always admired him so it was overwhelming to see his bigger than life portrait looking right at me.  The museum not only houses portraits of all our presidents but other fine artwork as well and I selected just a few of the photos that I took that day to display here.

Selfie fun waiting for the National Portrait Gallery to open

Afterwards we had a fabulous lunch at Zaytinya then my sister, nephew and I headed off to the United States Botanic Garden.  I had been there only very briefly before so I knew I wanted to go back and my sister and nephew were game for it as well while hubby went off and did his own thing that afternoon.  I still don’t feel like I saw everything. Did I mention the oppressive heat during our entire D.C. trip? It extended to inside the Botanic Garden as well. There are climate controlled rooms but since it’s all under glass, some of the rooms were a bit stifling. Luckily we were able to escape to air conditioning periodically.  As we left we walked past an outdoor garden that is also part of the U.S. Botanic Gardens.  We were too hot and too tired to venture over there so I will have to go back again! 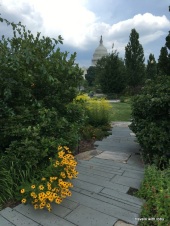 outside the U.S. Botanic Garden

Our last day in D.C. started with an exhibit of political cartoons at the Corcoran School of the Arts and Design at George Washington University .  Since I had already created a post of this, I will link it here rather than talk briefly about it in this post.  But I will say what a great exhibit it was and how necessary a free press is to the survival of democracy.  Here is one of the cartoons from the exhibit: 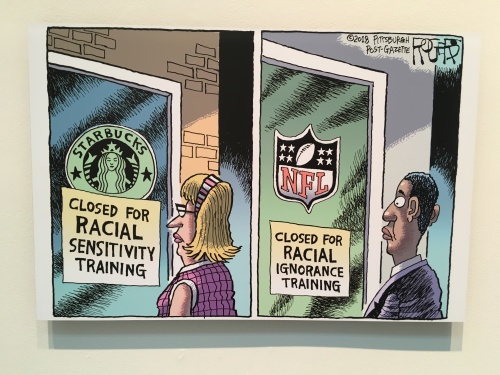 After the cartoons exhibit we were going to get a cab to the National Archives but the clouds rolled in and suddenly that oppressive heat didn’t feel quite as oppressive.  So we walked…….and walked…….and walked.  Uh, it was a little farther than I thought it would be and we were thankful to be in the air conditioning once again at the National Archives.  More wow!  We checked out one of the four surviving copies of the 1297 Magna Carta and some of the history of our nation on the first floor before heading upstairs to view the original Declaration of Independence, the Constitution and the Bill of Rights.  These original documents are all in glass cases in a darkened room to protect them so that future generations of Americans can view them.  It was truly awe inspiring to see our rights as originally written all those years ago.  I recommend this to every U.S. citizen.

Hubby and I wandered up 7th Street to find lunch.  We stopped into Oyamel where I actually dined with Cathy on a previous visit, but the wait was too long so we moved on.  We ended up at the Chop House Brewery and had another delicious meal.  I also highly recommend this restaurant that has great food and ambiance.

Once again we split up as I wanted to go to the West building of the National Gallery of Art and hubby needed to see more of the Library of Congress.  Years ago he travelled with me to D.C. where I was attending a conference for work. During that trip he stopped into the Library of Congress but only had about 10 minutes so that was one on his “to do” list for this trip and he enjoyed his extended visit this time.  I found all my favorites in the National Gallery of Art and I was able to take my time in the gift shop, something I love to do but I sometimes feel rushed when I’m with others. I found some treasures, purchased them and headed back to the hotel once again.

It was such a fabulous trip this time.  It was nice to be able to take our time and see the things we wanted to see.  I think we would have seen more if it wasn’t so awfully hot.  Every day we were there it was over 90 degrees but the worst of it was that morning at Arlington as we only had little bits of shade to rest under to barely escape the heat.  One key to our successful trip was that we decided we would not be rushed.  I only felt a little rushed at the Portrait Gallery. I could have lingered in there a bit longer but we had lunch reservations.  But by the time we sat down at Zaytinya, it was time to rest and take nourishment. 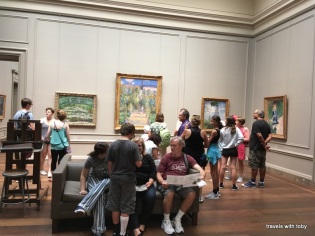 I hope you’ve enjoyed this mini tour of our most recent trip to Washington, D.C.  Please come back again for more detailed posts and more photos of our trip. Coming soon!!