I know this isn’t a very exciting topic but it’s all I got right now until it’s time to display autumn colors. And in my continuing series of avoiding the awful news of the world, I bring you the story of my kitchen upgrade.

About a week after we moved into this house the paint on the kitchen ceiling began to peel.  Okay, maybe it was two years after we moved here. Regardless, it was ugly for way too long and I couldn’t wait to have the room repainted.  We hired the guy that did our emergency bathroom remodel several years ago. We hired him last year, I think it was April?

Then I was recovering from injured shoulders last fall so we put it off until this year. We were all ready to start the week after lockdown began for the pandemic. And hubby said “what if the restaurants close?” which would be a huge issue after your stove is disconnected. The very next day Minnesota restaurants were closed so our remodel was put off again until places started offering curbside pick-up and delivery. We finally got started at the beginning of June.  And it was all completed about a month later.

Since we had to get a new refrigerator we got that accomplished last fall. Here are the “before” photos where you see the new fridge in the old kitchen and the other side of the kitchen with the stove. These are the photos I used to choose our new floor. I was able to import the photos to see how various floors would look in our kitchen. Very handy tool! 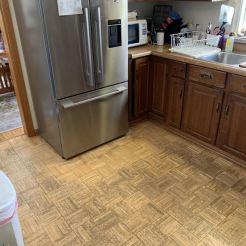 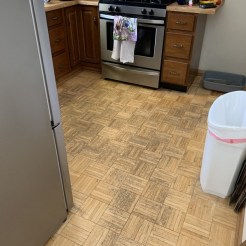 We decided to keep the cabinets since they’re still in good shape. But we had them painted, bought new handles and hinges too, then got a new counter and floor and the walls and ceiling painted as well. We’re pretty happy with it!

Following are before and after photos that I hope you will enjoy. Also included in the gallery are photos of one creative supper that we made with our Coleman stove on the back step for veggies and fried potatoes and the grill for the steak that we had that night. We also had our tiny bathroom upstairs redone and we used the same flooring.

other side of kitchen

stove and fridge in dining room

we have a Monkey Ward sink!! 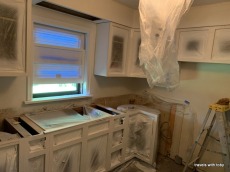 Painting begins, other side 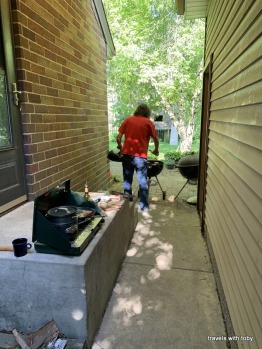 creative dinner in breezeway and patio

he makes the best fried potatoes

that’s our counter all rolled up

Frankie checks out the new counter

my only before photo of razors behind medicine cabinet

And now for the portion of the post that isn’t kitchen/bathroom related. One day I decided to walk a little further on my walking break from work and made it all the way to the eastern part of Central Park here in Roseville where the Muriel Sahlin Arboretum thrives. Here are some photos from that little jaunt:

on my walk back from the arboretum

I will close with some photos of blooms et al, stuff I take photos of on my walks. And a video of a great blue heron in flight. I was finally able to capture this majestic bird!! Check out the egret towards the end as he lands.