A near perfect weekend at the cabin in the woods in northern Minnesota.  It was made less perfect by yet another horrible drive out of town Friday afternoon.  I wrote about our first trip of the year to our cabin recently and we had hoped to avoid the traffic jam of last trip by taking a different route. Ah but the best laid plans of mice and men….a theme that comes up over and over in my life.  What normally takes just over three hours took nearly 4 1/2 hours to start off our nearly perfect weekend. So, that really was the worst of it unless you count the rain we woke up to Saturday morning. I kept saying it would clear up and it would be a nice day. Thankfully, I was correct!

We arrived exhausted from our long car ride but we decided the pain was worth it once we settled in, had some supper and then sat by the campfire watching the most gorgeous sunset.  We were rewarded in other ways as well during the weekend.  We got to see and hear much wildlife such as bats and fireflies Friday night.  While at our campfire Saturday night we saw two great blue herons duking it out over territory, or we presumed as much.  I spotted an eagle flying along the shore and then moments later, that same eagle flew right overhead with something in its claws and two smaller birds close on its heels squawking something fierce. We assumed that the eagle probably grabbed one of those birds’ family members :(  On our way to breakfast we witnessed a mother turkey with three (or four?) baby turkeys just walking along the road!  On our return trip the turkeys had left.  One last wildlife sighting happened just outside of town on our way home, a deer and two youngsters leaping across the road! I had to brake in case there were more.  I wish I could have gotten their pictures.  Instead here are some pics of the fabulous sunset we enjoyed Friday night. 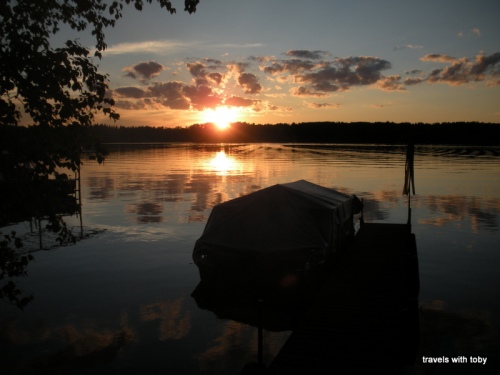