The making of paella

I have made paella many times using this same recipe for about 30 years.  It came from a now closed restaurant in Los Angeles called La Masía.  And this time I decided to document so that I could share the process.  Rather than write out the recipe because, after all, you can find the basic recipe online and there are many variations, I’ll just show the basic steps.  The thing I love about paella is that you can pick and choose what you want in it. For example, the recipe I use calls for lobster tails and crab legs.  I’ve never put lobster tails nor crab legs in my paella but I certainly  could add one or both if I so desire.  It’s truly up to the cook.

First, assemble your ingredients which means cutting up the meat and chopping up the veggies and garlic:

Heat olive oil in your paella pan.  Next, fry the meat.  My recipe tells you to fry the meats one at a time then remove them.  But a video that I just watched (linked below) shows the meats being cooked all together and the meat does not leave the pan until the dish is served.  Again, just variations on a theme:

Next, cook the onions and peppers until tender: 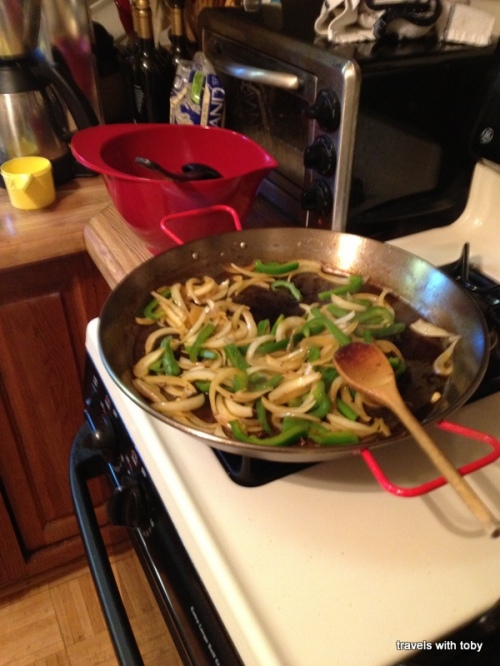 The red bowl next to the stove contains the meat I just fried.  Add the chopped tomato and garlic to the pan. Next add the rice and stir until grains are translucent, just a few minutes: 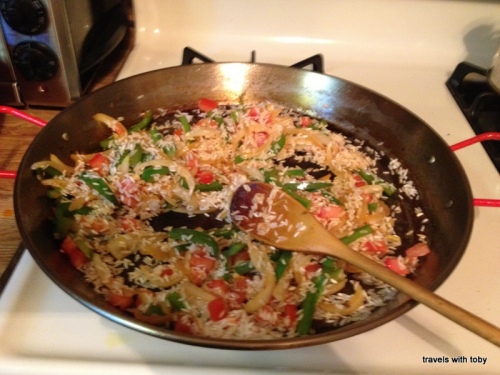 Then add chicken broth and spices.  Put the fried meats back into the pan, add your desired seafood: 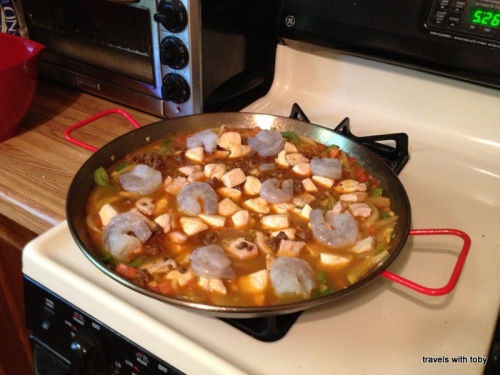 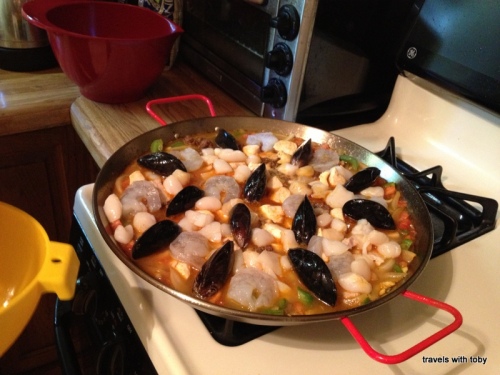 Now the next step in my recipe says to cover and simmer for 30 minutes.  But last night’s paella was the first time since I’ve been making this that the rice was not fully cooked? And so I googled and discovered that you do not have to cover the pan?? One thing to keep in mind is to not stir once the seafood is placed on top.  It will disturb the rice.  Add peas at the end, cover loosely with foil and let sit for about 10 minutes.  Garnish with lemon and serve.

The last time I made the dish I used paella rice which apparently absorbs better than “regular” rice. We’ve decided that we’re going to purchase this rice for next time.  It comes from Valencia Spain.  The paella was good but was not my best creation.  Live and learn I guess.

I thought I would also share the link to the video that I just watched.  This paella has a few more ingredients that I don’t use but now I’m considering using for future paellas, paprika and white wine.  Oh yum!

How to make the perfect paella

And another entry I found with some good information about paella.

22 responses to “The making of paella”