August 1, 2007 is one of those days that I will never forget.  The day the interstate bridge collapsed.  We sat agape in front of the TV watching all the coverage of this tragic event for the next several weeks.  I used to go over that bridge on my way to the office about once a week as I was working from home then.  And I had crossed the bridge that very day.  I remember that the head of my department at work sent out an email the next morning to those of us that travelled the bridge to ensure that we were alright.  I was alright physically but I wasn’t okay emotionally for quite some time after that.  I was stunned that this could happen. I read everything I could find about the people that died, others that were injured and the kind-hearted people who stopped to help.  And I cried and cried off and on for weeks afterwards.

I had heard about the memorial that was being erected but never saw it until recently.  My office is just down the street from the memorial and I have been taking photos of it on my not-so-daily walks for some exercise and a bit of fresh air (though today’s air was a bit “soggy” with all the humidity, but I digress again!).  It’s a very moving memorial positioned atop the bluff overlooking the Mississippi River where so many vehicles and victims ended up that day nearly 7 years ago.  A granite wall with names of the survivors stands behind 13 pillars, one for each of the people that died.  On each pillar is a brief description of those that died, some are in their native language.  On one of my walks I began to read the pillars……and I had to stop after the fifth or I would have burst into tears.  I will have to go back to read the rest but perhaps only a few at a time.  It’s a very nice memorial.  I hope you’ll enjoy the scenic tour I’ve put together. 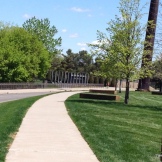 approaching the memorial from the west 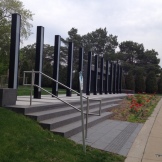 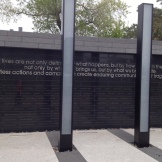 I happened upon this marker and until putting together this post I had no idea what the MPR Sound Point was.  I googled and discovered that MPR and the city of Minneapolis put together a tour of public art in Minneapolis.  Here is how the tour works, from the link to the story at MPR: “Signs posted at each artwork location direct viewers to call or text a phone number or scan a bar code with their smart phone and listen to the artist describe the artwork in detail.” 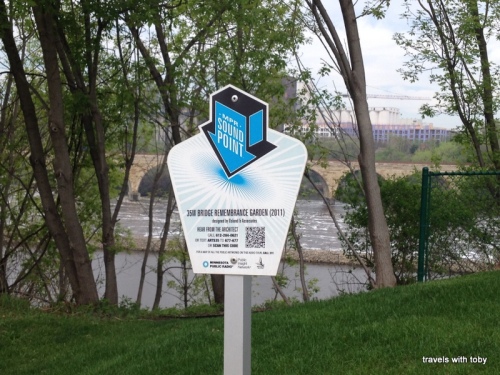 MPR Sound Point with the Stone Arch bridge in the background 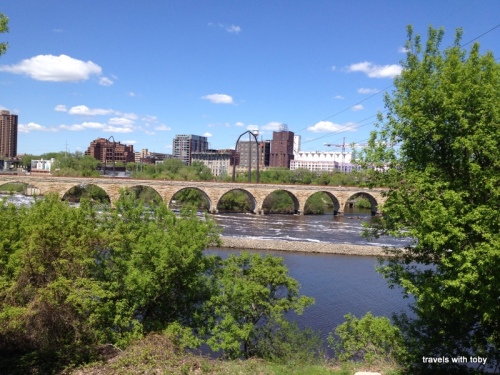 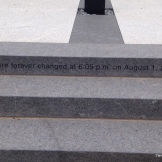 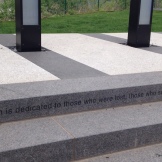 this garden is dedicated to those who were lost, those who survived…. 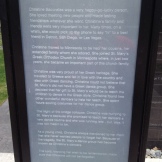 Just today I took this photo to capture the wording on the granite wall.  I love how the pillars are reflected on the wall.

Our lives are not only defined by what happens, but by how we act in the face of it, not only by what life brings us, but by what we bring to life.  Selfless efforts and compassion create enduring community out of tragic events. 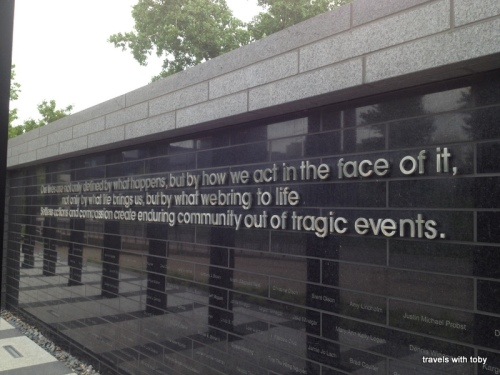 I took this photo today as well in Gold Medal Park just across the street from the memorial.  It seems only fitting to end with a flower in memory of the victims of the 35W bridge collapse.  May this never happen again.  Click here for more information about the bridge before and after its collapse. 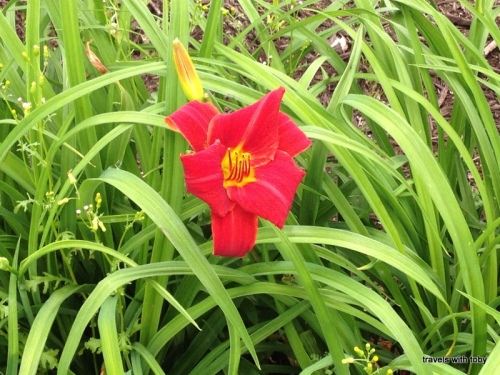