a once in a while Hanukah celebration

We always light the candles for Hanukah but this year Miss M also requested a Hanukah meal.  I don’t make a special Hanukah meal every year and it has been a while since the last one, so I got to celebrate with fun food along with lighting the candles this year.     Of course I took photos along the way so come along and see how this family celebrates Hanukah.  First, a photo for every night we lit the candles, except one because there were only two and both were bad!

My Hanukah meal consisted of roast chicken, potato latkes, noodle kugel and carrots in a maple/orange juice sauce.  One word: Delish! I’m kicking myself because I forgot to take a photo of the chicken!  But I did get some nice ones of the other food.

potato latkes about ready to be flipped 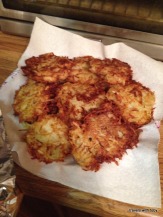 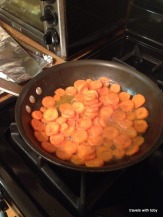 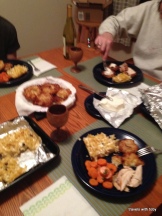 I always make rugelach every year as they’re my favorite holiday cookie.  A mixture of currants, honey, nuts, sugar and cinnamon rolled up into a butter/cream cheese/flour dough, then brushed with cream and a dusting of sugar.  Yum, yum, yum.

it’s hard to keep it in a circle

probably my best circle of the four I rolled out

next batch ready for the oven 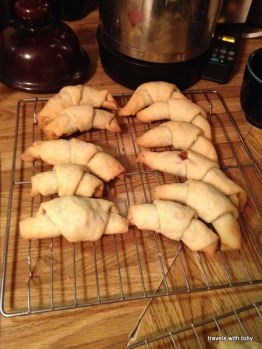 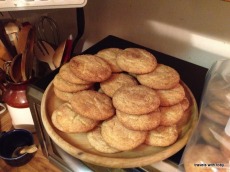 In this house we celebrate both Hanukah and Christmas, one because it’s my heritage, the other is due to my beliefs.  I also look forward to and celebrate the solstice.  The days have a little more light and now we’re moving in that direction again.  It always makes me feel better for some reason.  And it gives me the strength to get through the winter.  Spring will come again!!

19 responses to “a once in a while Hanukah celebration”