The last day of the original Bell Museum, U of MN, Minneapolis

Ever since hubby talked to a U of MN employee at the fair last summer about the Bell Museum, we have been planning to go before they closed on December 31, 2016.  A couple of times our plan was foiled by the weather, but New Year’s Eve day was our very last chance and we made it!!  To say I was impressed is an understatement.  I had no idea there was this gem of a museum at the University of Minnesota.

Before you get into the building the antiquity of the place hits you.  The front doors look to be original to the nearly 145 year old structure.  The James Ford Bell Museum of Natural History opened on March 1, 1872 after the Minnesota legislature approved this:

You can read a little more about the museum at this link  although I’ll warn you that I’ve tried to play their video about the history of the museum twice and it’s not there.

There are two floors with the world famous  3D dioramas that depict scenes of typical animals in Minnesota. They are so realistic and in looking at the photos, they look like portraits but those are life-size imitations of real animals.  There is a mezzanine that displays other exhibits but we skipped it that day.  There is an auditorium on the lower level and a room with items you can touch, the Touch and See Discovery Room.  And I was surprised to see a Rainforest Gallery with live plants and trees.

I had no idea there was so much in this museum and I’m so glad we finally got there.  Hubby actually had been there as a child so it was fun for him to relive some of his younger days.  He said it looked exactly the same too.  The new museum will be on the St. Paul campus, where I work, and is scheduled to open in 2018.  One day I happened upon the construction webcam.  It’s fun to watch the time lapse movie.

Below are some of my favorite photos from our visit: 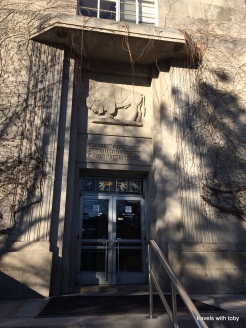 close up of above entry

so lifelike! (diorama at the Bell Museum in Minneapolis)

a little on dioramas

the dioramas are behind the glass on the right 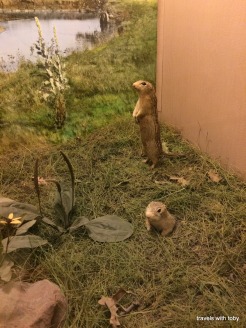 golden gopher, U of MN mascot 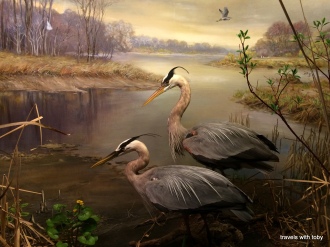 lifesize bear but manmade fur, the real stuff is behind him 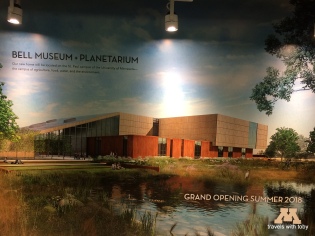 what new building in St. Paul will look like

Rain forest in the middle of the building!

close up in Rain forest room

one of the fun interactive displays

these are the two that I listened to, fascinating

9 responses to “The last day of the original Bell Museum, U of MN, Minneapolis”