Last weekend my friend Ruth and I went on a Summit Avenue walking tour in St. Paul and I wanted to share photos and what I remember. It’s a 90 minute tour of some of the biggest and oldest homes on Summit Avenue that starts at the James J. Hill house.  We walked maybe a mile total and heard histories of several homes.

We learned the James J. Hill house was the most expensive house on the Avenue at the time.  The enormous mansion cost $1,000,000 to build in 1891, about $2.7 million today. Throughout the tour our guide would tell us how much each of the houses cost to build and the James J. Hill house far surpassed every other house we viewed.  One can’t help but notice the dark stones on this house. It was due to coal being used to heat the homes at the time. Our guide spoke of an attempt to clean the stones using a sandblaster and how that damaged the stone, so they stopped doing that. It sounded like cleaning these stones was low on the priority list of upkeep for this house.

James J. Hill was the guy who created the Great Northern Railway between St. Paul, Minnesota and Seattle, Washington.  He made a fortune in the railroad business and was able to build the home of his dreams.  The tour of his ornate mansion is also worth a visit. I took the tour shortly after I arrived in Minnesota 27 years ago.  I think it might be time to take that tour again. These two photos were taken at the same time but I lightened up the second one: 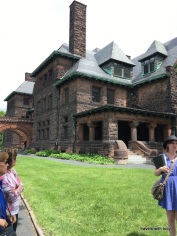 One of the themes of this tour was money because all of the houses on the tour were owned by the wealthiest people in St. Paul.  Our guide told us how much it cost to build each of the houses on our tour. It’s so interesting especially in today’s market.  Towards the end of the tour we saw Hill’s carriage house(260 Maiden Lane) for the mansion across the street. It’s been converted into condos and one of them sold for $800k recently. We all wondered what Hill might think of this, that one third of his carriage house is worth nearly as much as he paid to build that huge mansion across the street.

Next door to the Hill house was the home he built for his son Louis, apparently the favorite son.  Along the way our guide mentioned the many styles of the houses and you could see that each owner selected styles that appealed to them.  I don’t remember all of the styles mentioned but Richardsonian Romanesque was one that was repeated a few times. The Hill house is in this style. Others mentioned were Queen Anne and Italianate.  The following gallery contains the first several homes that we looked at, including the oldest standing structure on Summit Avenue built in 1858 at 312 Summit.

Note the different brick towards the back of the house 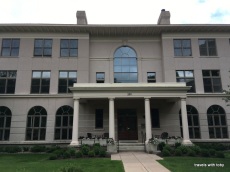 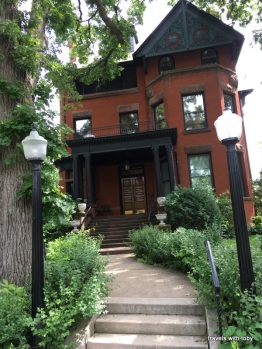 There’s a bit of a story about these next homes. They are called the Leitner and the Leitner-Young homes. These two owners were lawyers together and our guide joked that they must have liked each other so much they lived in a double house together(322 Summit). Some years later, Mr. Leitner had another home built right next door. Had enough of Mr. Young and family? Hmmm.  There is also a tunnel between the houses.

The following gallery contains photos of the next homes that we viewed.  Our guide pointed out that on the left side of the large red stone house the carriage area had been converted to a garage.  She pointed out the white house across the street(365 Summit) as this one’s her favorite on Summit Avenue. She likes that it’s the only white house on Summit and that it’s the first house on Summit Avenue that was owned by a female, Martha Bass. 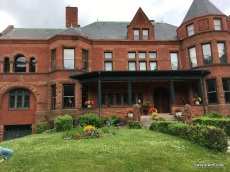 We rested a little bit at “Lookout” Park, or Summit Overlook Park, which offers a nice view of the Mississippi river valley below as well as The University Club, a very exclusive club. It was even more exclusive during the time all the mansions on Summit Avenue were being built. In order to become a member you had to be a white male with an Ivy League education. So James J. Hill, who had only an 8th grade education but was one of the wealthiest men in St. Paul, could not become a member. But his son Louis, who went to Yale because his father wanted him to have the best education, could become a member.  Irony of ironies that.

From Lookout Park: Smith Avenue bridge over the Mississppi

After our short rest in Overlook Park we crossed Summit and our guide took us down Maiden Avenue(parallel to Summit), so named because the female servants for the wealthy people along Summit Avenue lived in row houses here.  We passed the building named The Commodore  where F. Scott Fitzgerald and Zelda resided when their daughter Scottie was born. This was also where many gangsters lived during Fitzgerald’s time. Check out this interesting article about those gangsters that I found on MinnPost. I had never heard of The Commodore before but Ruth had been there for a wedding reception and said it was very nice. I think I may have to check out the restaurant soon!

The tour ends at the St. Paul Cathedral which was designed by Cass Gilbert, a prolific architect who also designed the Minnesota State Capitol as well as the William Leitner house at 318 Summit noted above. Both Ruth and I really enjoyed this tour and would highly recommend it to anyone that enjoys architecture and/or the history of  some of the wealthiest people of St. Paul.  While doing research for this post I came across several interesting articles that I’m going to link here for anyone that would like to do further reading. Within the first link there is a photo of the oldest house on Summit (at 312 Summit) covered in ivy, quite the contrast to how it looks today.