An interesting weekend up north

Memorial day is always our first trip to the family cabin and in recent years we have chosen to drive up Friday night, typically after all the other twin citians who head out of town are already gone.  Unfortunately for us, we chose the wrong highway to take north this trip.  Leaving late this time didn’t do us any good.  I had seen on the state’s department of transportation website that there was major construction happening on our favorite route but this same website also showed no congestion on a 15 mile section of that highway. We thought it wouldn’t be a problem by the time we got there but, we were stuck on that highway, now down to one lane either direction, going about 10 mph. It delayed us about an hour. We did eventually make it to Akeley and we were all asleep just after midnight. It’s so much better to wake up there rather than getting there in the afternoon on Saturday, even with our long drive up that night.

Saturday morning we chose to have breakfast at a place hubby and I tried for the first time last year.  It’s in Walker about 9 miles away.  We all enjoyed the great service and food at the Outdoorsman Cafe: 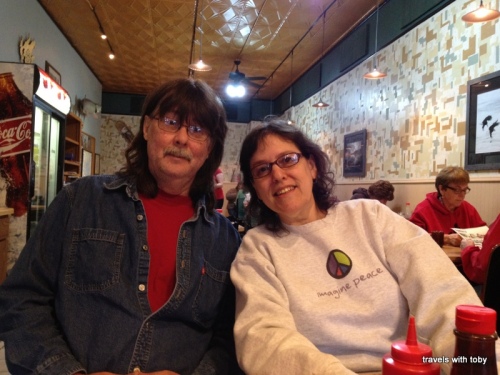 We stopped to get a few groceries and then, back to the cabin.  I was planning on showering before I made the rhubarb muffins (about my fifth harvest this year, I’ve lost count!) but that was not to be.  It was then that we noticed the new water heater.  Hubby and his brother tried to fix it thinking it just needed to be turned up but it just was not coming on.  The lukewarm water that I brushed my teeth in earlier was the last of what was in the tank.  So……no showers until my other brother in law could fix it.  Heh, no showers were taken at all because he was busy with graduation parties and could not make it until the next day.  We all made the best of it and even found the old pans that were used to wash dishes in before the cabin had running water.  It was like camping ;)

One of the highlights of the weekend was a walk on the Heartland Trail.  The cabin is just steps away from this nicely paved biking and hiking path where the railroad tracks used to be. My sister in law and I had a pleasant walk whilst catching up.  We happened upon these yellow lady slippers. I have never seen this type before, the pink ones yes(which are Minnesota’s state flower), but not the yellow ones. They were just stunning!!  And there were only two of them:

Have you ever seen a pine cone forming?  I sure hadn’t so I had to snap a pic of them:

Saturday night we had dinner at one of our favorite places, the Dorset Cafe, about 15 miles from the cabin: 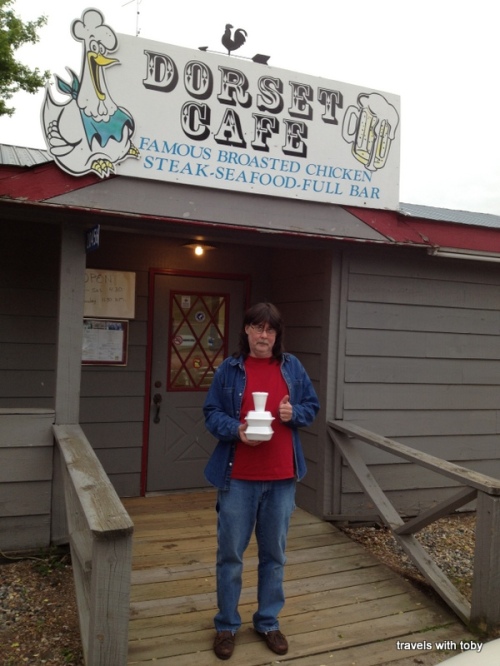 I always get their broasted chicken, it is awesome!  I was behind a woman at the salad bar who I overheard her saying she’s been meaning to try the Dorset Cafe and finally she was here. So I piped in that their broasted chicken was really good to which she replied “Oh good, that’s what I ordered!”  I am betting she really enjoyed her dinner.

I also snapped this pic of a Rolls Royce parked at what used to be Hammond’s gas station in downtown Akeley.  The gas station closed down many years ago so it was strange to see this nice car parked there next to the tow truck:

Akeley is a small northern Minnesota town of around 400 people.  In its heyday it was a busy logging town, roughly 100 years ago, and its population was around 3500.  It’s hard to imagine that it was once a boom town.   My mother in law grew up in Akeley and it is her family cabin that we all get to enjoy during the summer.  And so begins another season of visits to the cabin in the woods.

5 responses to “An interesting weekend up north”