“To Daloot” – a trip to Duluth, Minnesota

This past weekend we had the opportunity to travel north to Duluth, one of my favorite cities in Minnesota.  The “To Daloot” is reference to an old ditty that hubby heard a long time ago.   It goes something like this “Bus driver does this bus go to Daloot?” “Todaloot to you too buddy” says the bus driver.  Okay, maybe not terribly funny but ever since he told me this I can’t help but think of it every time we go to Duluth.

The past three years we’ve attended the Northland Competition that the Duluth Figure Skating Club hosts at this time of year.  My daughter competes with her synchronized skating team and it’s always a good time.  It’s fun to watch all the teams do their routines.  They are all so different and I like to compare all the pretty outfits they wear.  So, first are some photos of a few synchro teams.

Here’s Miss M waiting to go the the arena to compete:

Our club had two teams competing.  This is the beginner team (they placed third-I thought they should have been second): 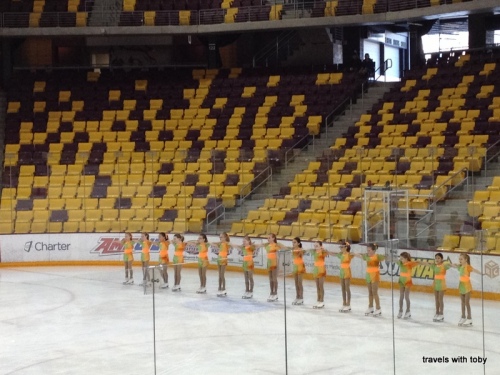 A couple of other teams we watched:

And now Team Expression, my daughter’s group.  They placed second, the best they’ve ever done in the three years she’s been skating on this team.  We are so proud of them!! 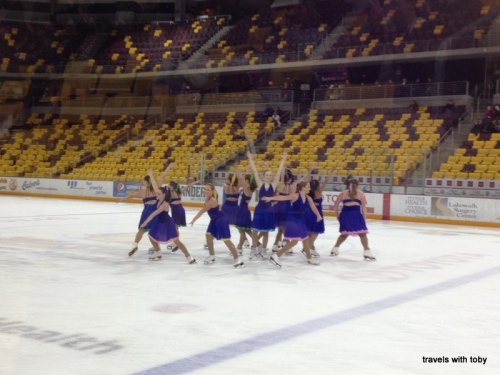 That was today’s excitement.  Last night we met some friends at one of our favorite restaurants, the Pickwick.  If you’ve got a hankering for good meat, this is the place to go.  It’s a Duluth landmark and if you sit in the room we sat in, you get a view of Lake Superior.  The sun had just set so I wasn’t able to get a good shot of the lake.  But I did take some photos of the signs outside and a few inside as well.  Up first, the photos from the outside.

I love the colors in this one, such a beautiful blue background:

On the way to our table: 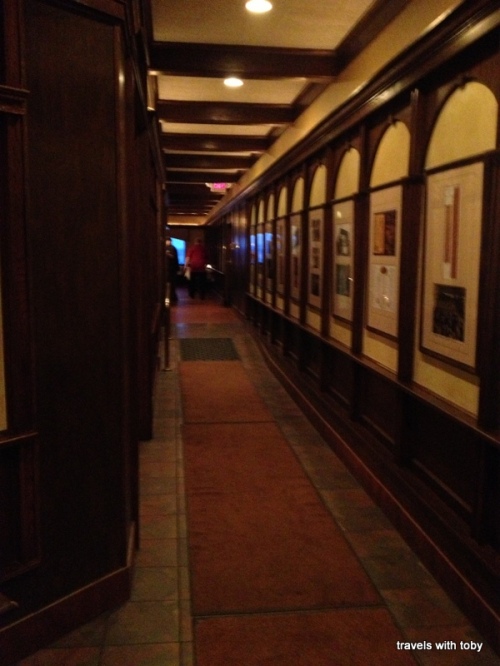 We got to sit near the grill and boy was it nice and warm in there!!  I managed to snap this photo just as the chef got the fire to light up:

It was tough to decide what to eat, their menu has many tasty selections.  I finally decided on their Tenderloin Penne Bleu which is described like this “Hand cut beef tenderloin medallions with mushroom, red onions, bell peppers in penne pasta tossed with a creamy Gorgonzola sauce.”  Doesn’t it sound rich?  Oh my, it certainly was rich!!  And quite delicious.  Hubby had their prime rib.  He said it was the best prime rib he’s had in a long time.  Like I said, if you like meat, this is the place to go as they sure know how to cook it!  And they have real horse radish to go with it, more happiness-making for my better half.  He also chose their famous onion rings as his “potato”. I tasted one and it was very good!  Our companions had steak and their Classic Reuben.  Both of their plates looked equally delicious.  After dinner the waitress brought this:

At first we thought she had given this scrumptious-looking dessert to the wrong table so we called her over.  But she said “Oh you know who this is from don’t you?” It took us a few minutes and then we remembered that one of the waiters had greeted one of our friends when they first arrived.  And he treated us to this dessert.  How awfully nice of him!!  We all took turns scooping up a bit of the Red Velvet Cake, ice cream, whipped cream and cookies onto the little plates they gave us.  More deliciousness!!  We left there very satisfied and the Pickwick remains one of our favorite places to eat in Duluth.  Here’s the link to their website:

Since the team was practicing and rides were arranged for them to return to the hotel, we were on our own.  We stayed at the Radisson  which is circular.  There is a restaurant on their top floor and hubby had seen that a jazz band was playing there from 9 until midnight so we spent a little time up there, had some drinks, admired the view of the harbor and listened to the jazz trio (bass, guitar and sax).  They were pretty good and it was a relaxing thing to do while we waited for Miss M to return.  Between each window is a point on a compass counting from zero to 360.  We were sitting at 172 degrees: 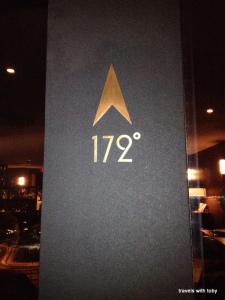 Other photos of the bar/restaurant: 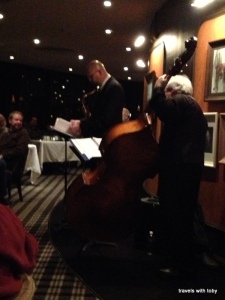 Have you ever been to Duluth?  What are places that you like to eat or stay?  In years past, when Miss M was much younger, we’ve stayed at the Best Western Edgewater.  The first time we went there it was your basic Best Western.  But they remodeled it, added more rooms and a cool water park.  It’s a lot of fun for a family with kids and  I highly recommend it for summer time.  There are many things to do and see in this harbor town and I feel like I’ve only scratched the surface.  Perhaps this summer we’ll head back up to Duluth and visit some museums like the S.S. William A. Irvin Ore Boat Museum.  This ship is docked right next to the Amsoil arena and it’s fascinated me since seeing it for the first time three years ago.  I would love to go inside!

7 responses to ““To Daloot” – a trip to Duluth, Minnesota”