winter kabobs in the snow

Our grocery store makes up these wonderful beef and veggie kabobs that we’ve eaten on numerous occasions and we decided to have them again tonight.  We like to defy winter by grilling all year long.  When we got to the store they only had all meat kabobs instead of the meat/veggie ones we normally purchase.  Apparently they stop making them in the fall as they don’t sell well in the winter months.  Go figure huh?  So we bought the all meat kabobs and decided to add veggies to them.  The nice butcher gave us extra skewers.  I thought I’d share the process in photos. 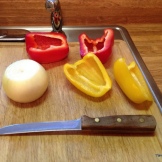 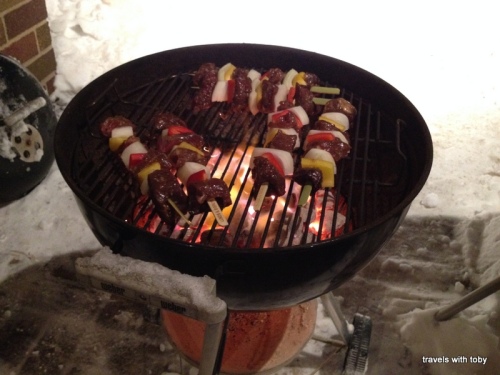 And finally, a little perspective and you can see how much snow we’ve gotten this season.  Is it spring yet??

A few notes from the post-grilling.  One, don’t finish building the kabob with a piece of meat on the end.  Hubby said two fell off but he rescued them.  Two, he decided that perhaps kabobs aren’t the best thing to grill in winter.  You see with a steak he puts it on the grill and lets it cook for 5 minutes.  He then goes out there to flip it and it’s done in another 5 minutes.  I guess kabobs need a bit more attention and he wasn’t really liking going back out in the 14 degree weather to keep turning them.  Live and learn I guess!  But they sure were yummy :)

11 responses to “winter kabobs in the snow”